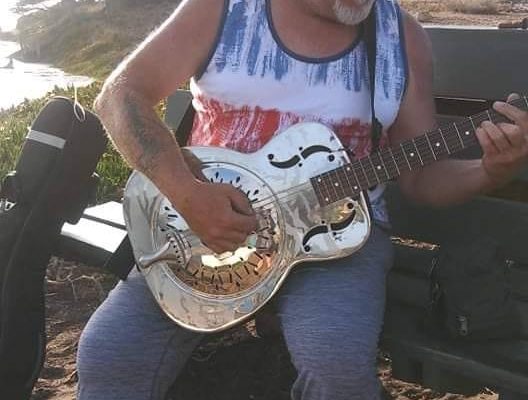 Singer/Songwriter Michael Foster joins us for our early show. Michael will be share his acoustic classic rock covers sprinkled with his originals. 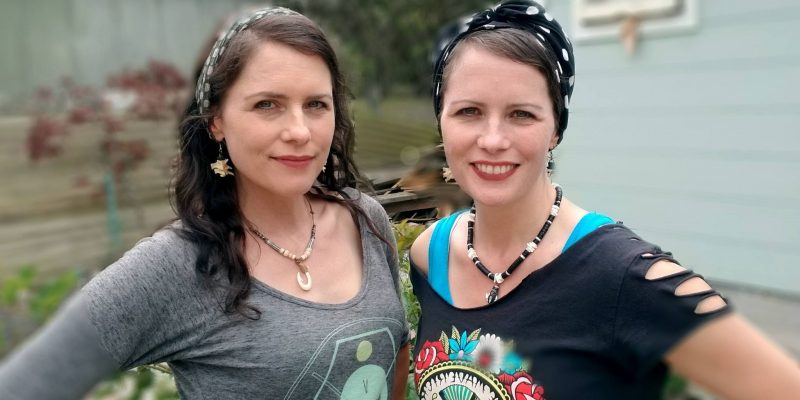 Forever Green plays folk rock music with a little edge and a modern twist. They create original music with unique, and, at times angelic, vocal harmonies. With Cara on acoustic guitar and hand percussion and Christi on piano/organ/synth, Forever Green has been described as ethereal and entertaining with an unexpected sound that can be both exciting and soothing. Their soulful lyrics are influenced not only by love and relationships, but also by folklore, mysticism, and ethics as well as environmental concerns. They certainly have a sound all their own, but could loosely be described as sounding like a brew of The Wailin’ Jennys, The Indigo girls, Ani Di Franco, and The Andrews Sisters. 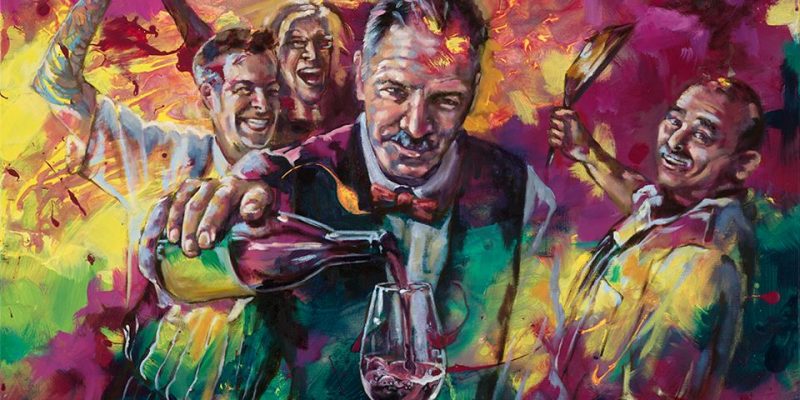 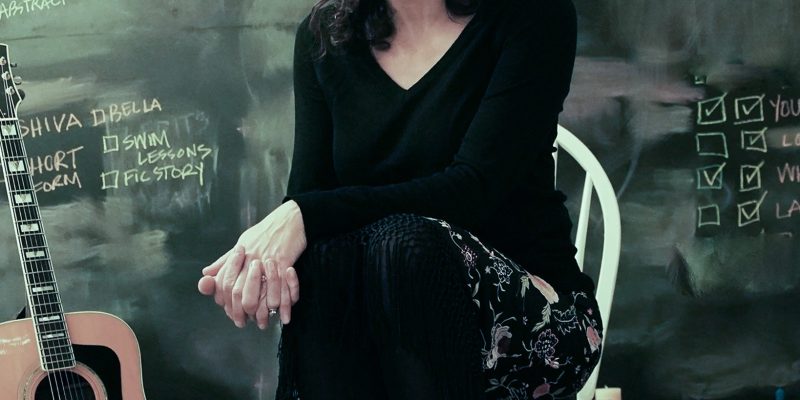 East Coast-born / West-Coast-based singer-songwriter Arielle Silver is a consummate storyteller whose rich, expressive voice and acoustic guitar frame expansive melodies that echo her tours and travels across the American heartland. With the heart of Laurel Canyon and the soul of the Chelsea Hotel, her recent album, A Thousand Tiny Torches, was an Americana Highways Favorite Album of 2020 and has been recognized in the numerous prestigious songwriting contests, including International Songwriting Competition (ISC), Great American Song Contest, and Music City Song Star. Music Connection named Arielle a Top Prospect 2020 / Hot 100 Unsigned Artist, noting, “Arielle Silver is a born communicator, an artist whose structured songwriting exudes intelligence and humanity. And the best part is, she’s also got a knack for catchy pop hooks and fun arrangements.” http://www.ariellesilver.com/ 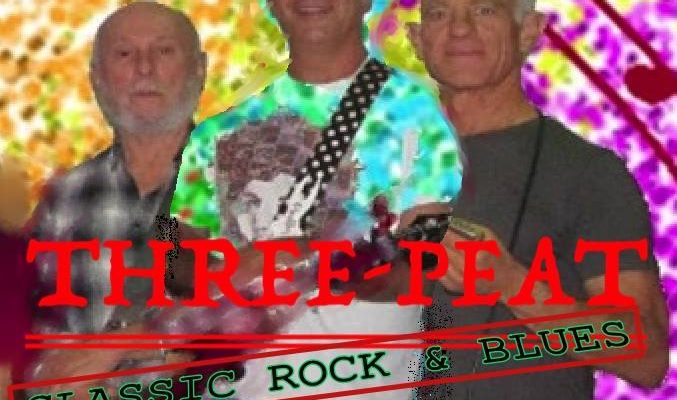 “Three-Peat”, is an offshoot of the South County Classic Rock and Blues band Cincopate, with Merv Hyde on bass, Jeff Priolo on harmonica & vocals, and Mike Gerber on guitar & vocals. These three have been playing together on the Central Coast for the past 10 years. Jeff has been known to appear with any number of acts as far North as Morro Bay and Paso. Mike Gerber has been on the local scene for almost 15 years. 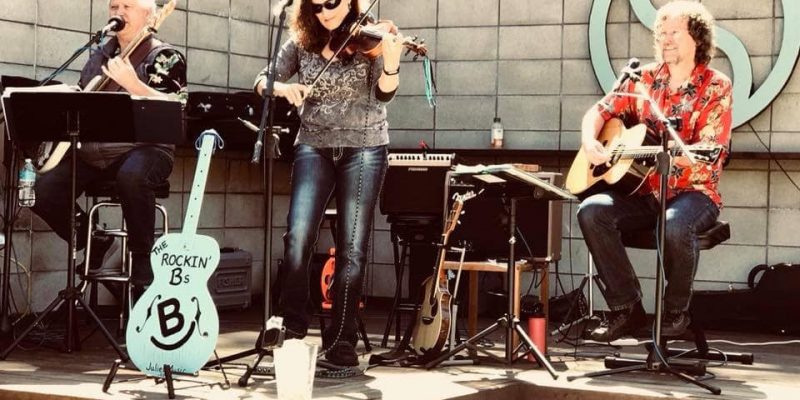 Three seasoned pros come together to create a musical experience that is authentic and FUN.  The sum of it’s parts, the Rockin’ Bs Band has a diverse repertoire that is great for listening and dancing.  Julie Beaver is a powerful country/blues violinist and vocalist who turns on the afterburners when it’s time to rock.  Kenny Blackwell is every bit as versatile as a musician and singer and demonstrates his tasteful guitar prowess anytime he is on the bandstand.  Americana man Wally Barnick brings strong vocals and solid electric bass. Music lovers of all ages will enjoy the wide range of styles, quality musicianship and good vibes that the Rockin’ Bs Band members bring to the stage. 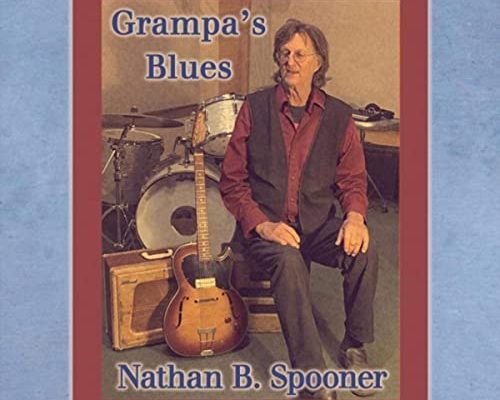 Local Singer/Songwriter Nathan B. Spooner will be in the house playing tunes from his newly released CD, Grandpa’s Blues. Joining him for the evening will be Kenny Lee Lewis on bass and Jimmy Stromberg on percussion. Come on in for some blues and fun at PoP! 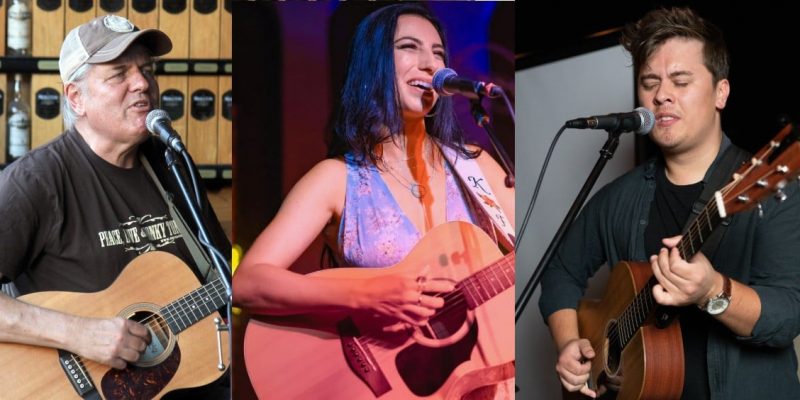 Fans of John Mayer will find a lot to like about Josh Rosenblum, known for his fluid jazz-rock guitar chops and passionate vocals. We’ve featured Josh on several showcases, and he was also a big hit on our tributes to Stevie Nicks, Leonard Cohen and James Taylor. The Modesto native, now based in SoCal, has played music all over the state, both solo and with his band. His roots are in jazz, evolving into acoustic pop originals. Preview his music at http://www.joshrosenblumband.com/music.html

Katie Ferrara is an award winning alternative pop singer-songwriter from Los Angeles who writes positive,  honest and authentic music with an ethereal flair.  She has released several albums as an unsigned independent artist  including “Dream Catcher” (2016) and “Break Free” (2020).  Her music can also be found on the Season 5 premiere of the Hallmark TV show “Good Witch”. https://katieferrara.com/ 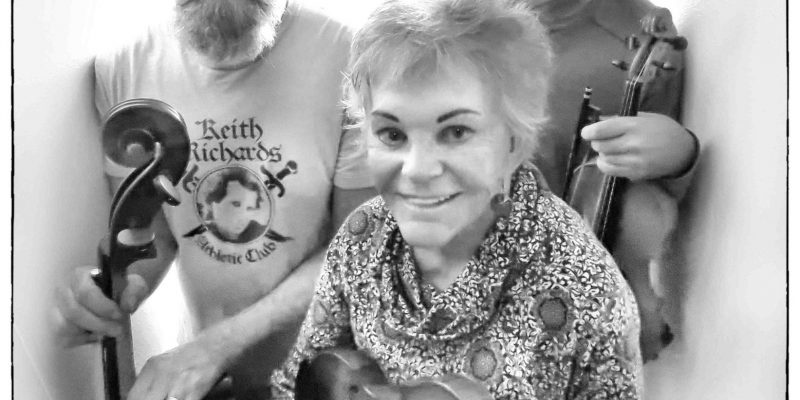 PoP wants to illuminate your evening with music by local favorites, Candlelight Strings; Bette Byers, violin, Sal Garza, violin, and Bob Liepman, cello. You’ve never heard anything like them unless you’ve seen them before. Don’t miss this opportunity to be thrilled in all good ways! – Photo Credit: Abe Perlstein. 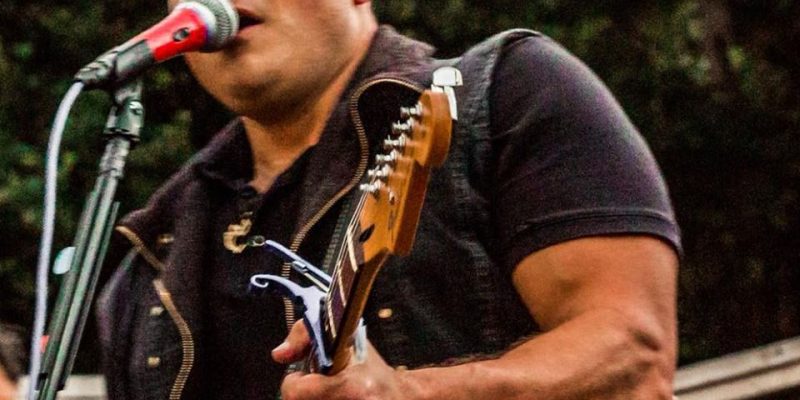 Geovoni Gabriele  is back  IN THE HOUSE for a Thursday night full of live and local music. Be aware that “& Friends” is always musical treat so join us for a evening to remember! This talented Singer/Songwriters will share some of originals and covers. 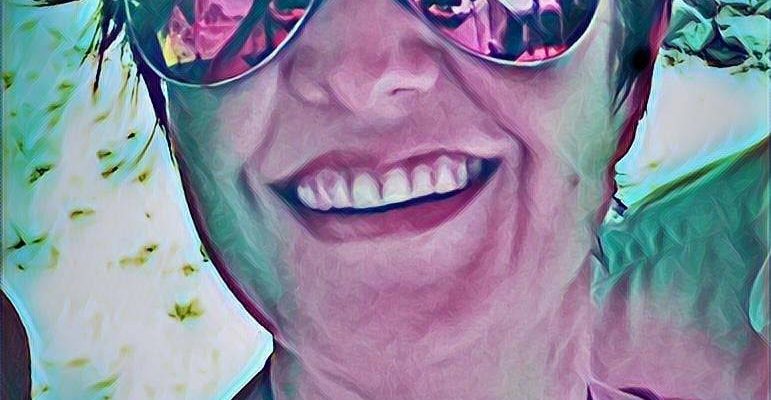 Erin Montgomery will be in the house and hosting our Open Mic night. Erin is known locally playing with Duet 2IT, Erin and The Earthquakes, & Surfeza. She’ll open the evening with a few of her own and you’ll do yours. It’ll be a fabulous night of music and good vibes! Sign ups start at 6:00pm. Wine. Brews. Menu. Locals. Puffer’s is the place! 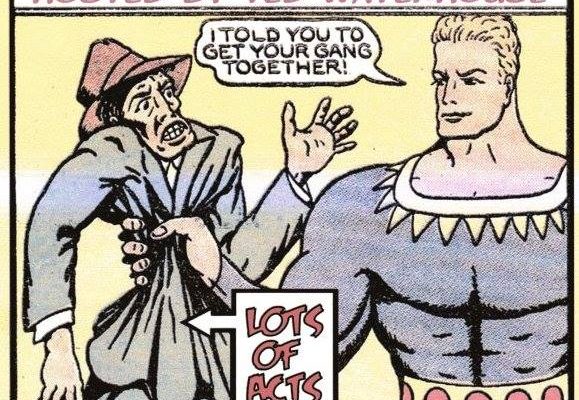 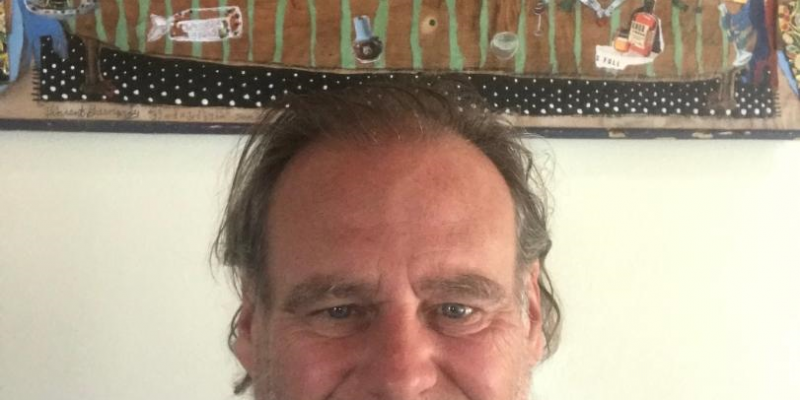 Vincent Bernardy will be back in the house with Noah Colton at PoP! We are also featuring Vincent’s art on our PoP walls! Vincent has been living on the Central Coast of California for the last eight years performing under the stage name St. Vincent Folk. He co-wrote & performed on “Rumers” new album “Into Colour”-“PIZZA AND PINBALL” Atlantic/Warner Bro. Records. With seven albums under his belt, his eighth is titled “MOONLIGHT DREAM BED” with singer “RUMER” featured on the song “Row Row” Also included on the new album are local favorites Jade Jackson, Chloe Smith and Emily Wryn.

Vincent was a part of the GRUNGE PUNK movement happening in the Minneapolis music scene during it’s heyday in the late ’80s &  through the 90’s. 1st Avenue 7th Street Entry and The Uptown became famous Minneapolis venues, playing and performing alongside such bands as The Replacements, Husker Du, Soul Asylum, The Suburbs, Suicide Commandos. Noted bands Vincent was a part of during these years were The Urban Guerrillas, Frances Gumm, The Us (Units of Sound) and opened for GREEN DAY, and worked with Mark Brown from Prince & the Revolution. 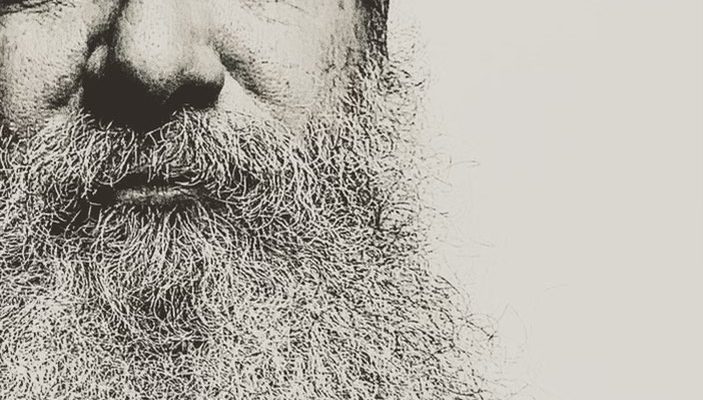 Singer/Songwriter Paddy Marsh will be opening the evening with his soulful vocals. Everything tinted with the blues 2020 finalist at the International Blues Challenge in Memphis, Tennessee. https://blues.org/ibc-2020-finalists-winners/ founding member of the band Crooked Eye Tommy, he toured the west coast extensively playing festivals and blues clubs Opened for Robert Cray, Marshall Tucker, & WAR and many more. His local band; Jackass Mail Blues Band recently formed in January 2021 and based in Grover Beach offers original material and eclectic covers that range from smoking blues and rock to soulful California country. He’ll be “bluzin” solo for our early show. 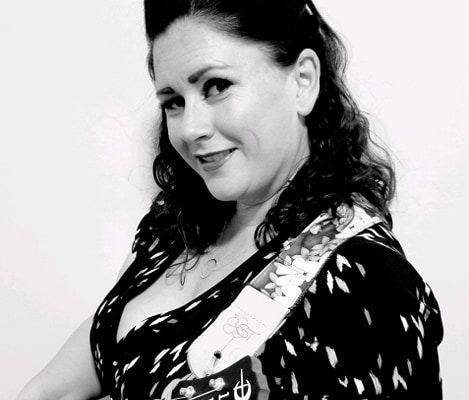 Natalie Morrell is a California native who has been singing since she could talk. After moving to the Central Coast with her husband 6 years ago, she learned how to play the ukulele and started performing. Her songs range from Sixties classics through to Top 40 hits, all with her own personal twist. Her low-key sound and whimsical renditions pair perfectly with a glass of wine in paradise.